SoftBank and Toyota Motor announced on October 4, 2018, that they would establish a joint venture (JV) named MONET Technologies by the end of fiscal 2018. The JV aims to provide innovative mobility services by combining Toyota’s Mobility Services Platform, an information infrastructure for connected vehicles, with SoftBank’s Internet of Things Platform that collects and analyzes data acquired from smartphones, sensors, and other devices to create new value. Initially capitalized at two billion yen, MONET will ultimately launch a mobility-as-a-service business, the capital being increased to 10 billion yen.
Here is the behind-the-scenes story of how SoftBank decided to establish the JV with Toyota, one of Japan’s leading companies.

Episode.1 Aiming to create a new mobility society: A behind-the-scenes story of establishing the JV with Toyota 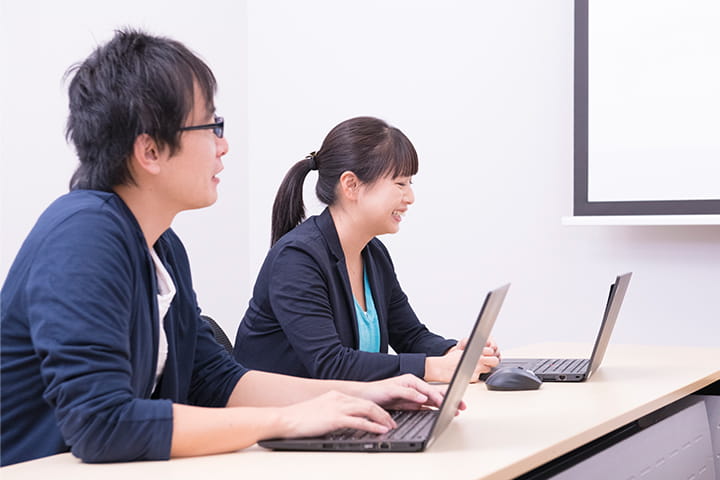 “At the first meeting with the Toyota project members, they gave us the kibidango sweets,” says Hirosawa, the project leader. As there is a Japanese folktale in which a boy used kibidango to recruit allies in his fight against ogres, the sweets meant the Toyota members’ humorous suggestion that the SoftBank members eating them must fight against “ogres” together. Upon receiving the sweets, all of them got the meaning and laughed. As the two companies primarily assigned their younger employees to the project, the meeting was participated by those in the same generation, proceeding in a friendly atmosphere in spite of the difference in their corporate cultures.

The automotive industry is in the midst of a once-in-a-century transformation. Hirosawa recalls that, seeing overseas mobility markets changing dramatically, SoftBank had the sense of crisis that Japan must start working on mobility services right away. It was around then that Toyota proposed the two companies work together, acknowledging SoftBank’s foresight to identify businesses with growth potential. Toyota has the Mobility Services Platform and a wealth of knowledge about automobiles, while SoftBank possesses information and communications technologies, big data, and expertise held by Group firms. The two companies believed that effectively combining their strengths would produce innovative mobility services for the future.

In February 2018, the project started with a small team—around 10 members in total from both companies. The members discussed time and again on what mobility services should be like in the future and what they could do to achieve that. Through these discussions, they came to share visions, shaping a concrete plan by May. Ultimately, they agreed on the need to establish a JV and proposed the idea to the heads of their respective companies. As both heads gave the go-ahead immediately, the project moved forward speedily, culminating in the October 4 announcement mentioned above. 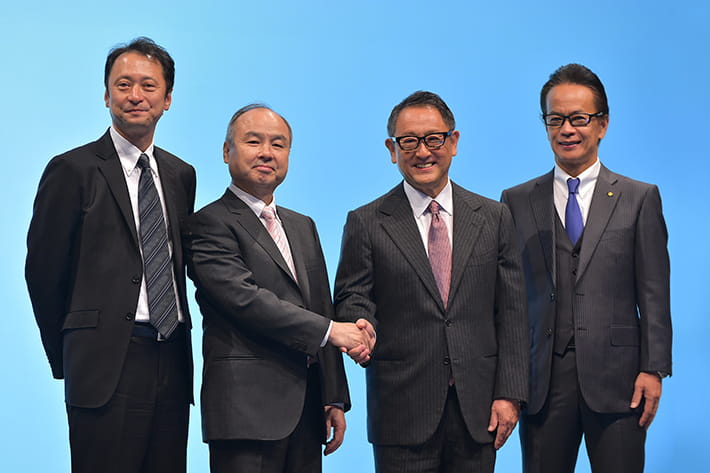 Episode.2 Hectic days from participation in the project until the JV announcement 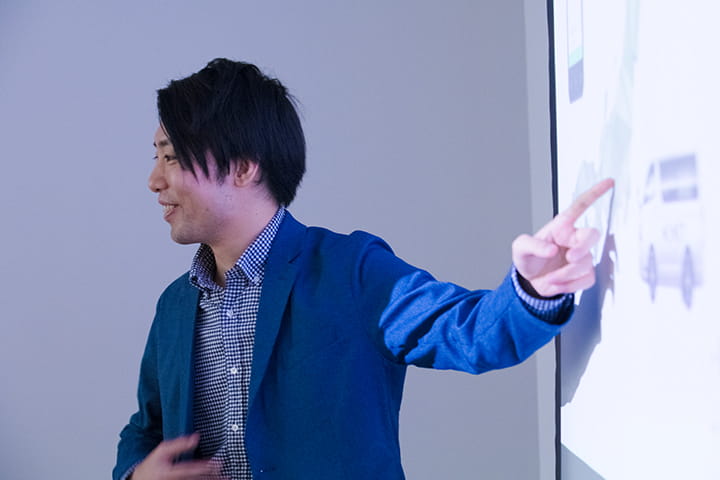 SoftBank’s personnel schemes include a job posting system, whereby a team launching a new business or company can openly recruit its members from within SoftBank, and employees applying for it are, if accepted, able to participate in the business they want to work for. It was through this system that Kawanabe and Matsui joined the Advanced Technology Division in July 2018 that spearheads this project. When recruiting new project members, the division did not disclose that the job in question pertained to the establishment of the JV with Toyota, but just vaguely stated that the job would involve the implementation of a new business strategy. Nonetheless, both Kawanabe and Masui were intrigued by the word “new.”
Prior to the transfer to the Advanced Technology Division, Matsui was tasked with improving mobile networks, such as ensuring connectivity at the venues of large events and enhancing coverage in various areas. What motivated him to participate in a new business by using the job posting system was the strong desire, which he had held since joining SoftBank, to take on the challenge of creating something new as an engineer.

“After the transfer in July, things were extremely hectic up until October,” Matsui looks back. With no prior experience whatsoever in the mobility field, he joined the project with zero knowledge about mobility. To gain necessary expertise, he studied the issues faced by the Japanese mobility sector, the sense of crisis held by the auto-related industries, and domestic laws and regulations, among other things, while always being on the alert for the latest developments. On top of that, the period coincided with the time when the project team needed to coordinate and finalize a mountain of matters before the JV announcement while collaborating with legal, finance, personnel, general affairs, and other relevant divisions, as well as preparing service plans. “He worked several times as hard as others during that period,” Hirosawa concurs.

“We all thought that, as Toyota and SoftBank’s joint project, we were not allowed to let the world down,” says Kawanabe, candidly revealing the responsibility and pressure the members were under. When drawing up a business plan, they also had difficulty in balancing their dreams with reality to create a feasible business model on the basis of what they envisioned for several years ahead. To achieve that, they worked a hectic schedule feeling responsibility and pressure. However, a business trip to a rural area gave Kawanabe an opportunity to see the mobility issues faced by the elderly firsthand, enabling him to understand the problems of Japan’s rural transportation and other services. “The trip triggered in me the desire to solidify the basis for making new mobility services a success, overcoming legal, regulatory, and other barriers facing us,” he says.

Episode.3 What enabled the project to progress so fast from its launch to the JV announcement 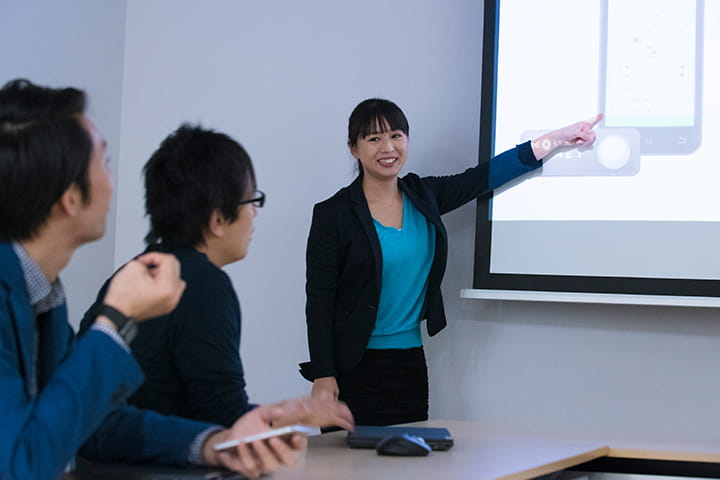 Launched in February 2018, the project culminated in the announcement on October 4 that the two companies would establish the JV by the end of fiscal 2018. What was the secret to the remarkable speed at which the project progressed?

“To move forward speedily when there was no single right path to follow, the project team had to be small,” says Kawanabe. There is no single right way to launch a new business. Although SoftBank has extensive experience and know-how in the communications business, the field the project was working on was mobility, an area entirely different from communications. He explains that a key to success was the project’s small size that enabled decisions to be made speedily.

Whereas the project was run by a small number of members until the JV announcement, it goes without saying that they were helped and given advice by people surrounding them. With a wealth of experts in the network, device development, satellite, and other fields, the Advanced Technology Division provided an environment conducive to casually seeking advice from non-project members. “It was also very helpful for the division to be located opposite to the office of Chief Technology Officer Junichi Miyakawa,” Hirosawa reminisces. Thanks to that, whenever there was a matter difficult to decide upon, the project members immediately knocked on his office door to seek his advice. There were also times when Miyakawa came to the members’ desks to encourage them. These made them realize the proximity to top management, both physically and psychologically.

According to them, the project reached a near impasse in the early phase; there also was a time when it hardly moved forward, then halted, causing the members to stay away. No matter how often they hit the wall, the members were unable to give up the desire to achieve their aspirations and eventually resumed discussions. They were also encouraged to try again by Ryuji Wakikawa, head of the Advanced Technology Division. When the project encountered a matter difficult to decide upon, Wakikawa himself joined discussions, offering his ideas from both management and front-line perspectives.

SoftBank boasts a corporate culture that willingly helps employees to take on challenges. Since the JV announcement in October 2018, the Advanced Technology Division has been inundated with words of encouragement and support from all over the company. “That is exactly who we are at SoftBank,” Hirosawa points out.

Episode.4 The future MONET envisions and the working environment at SoftBank 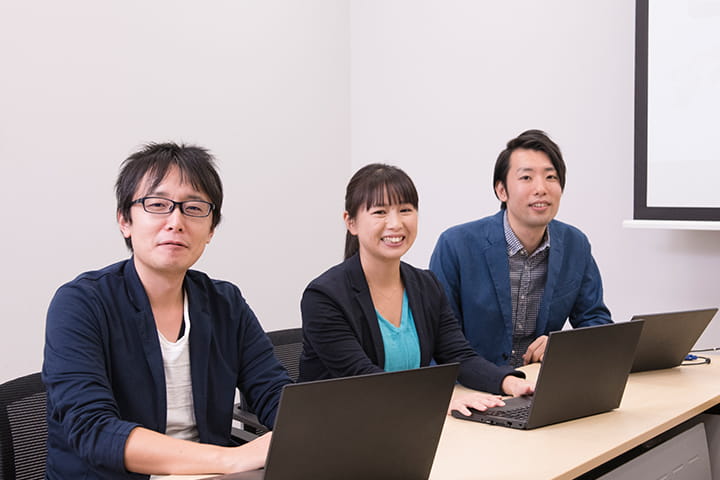 Owing chiefly to the graying of population and urbanization, Japanese society faces a range of mobility issues: the elderly unable to buy groceries due to the absence of means of transportation to the nearest stores; students forced to commute to distant schools because the nearest schools were shut down; and conventional transportation service providers suffering operating losses. What Kawanabe, Matsui, and Hirosawa hope going forward is to make MONET a successful example of a mobility service that meets people’s needs and improves the current situation—whether from the perspective of users, transportation service providers, or municipalities.

Kawanabe believes that SoftBank is a “company suitable not only for persons who want to pursue one goal but also for those who prefer to seek out one new challenge after another.” While steadily expanding the communications business, the company has the good sense not to fixate upon it but to diversify into new domains in partnership with various companies. He considers SoftBank allows employees to take on the challenge of working in a variety of fields without focusing on one as well as of launching a new business harnessing their own strengths.

Matsui, who admits he “joined SoftBank thinking it was a mobile carrier,” is also amazed at the dramatic change the company has experienced in the past several years. As numerous companies have joined the SoftBank Group, it is not uncommon for SoftBank employees to find that a partner company with which they had just worked together became a Group firm. Over a span of 10 years since joining SoftBank as a newly hired graduate, Hirosawa has been involved in founding five new companies. This makes her feel as if she worked for multiple companies without changing the employer. The three are unanimous in their view that “SoftBank provides employees with ample systems and opportunities that enable them to proactively take on challenges.” 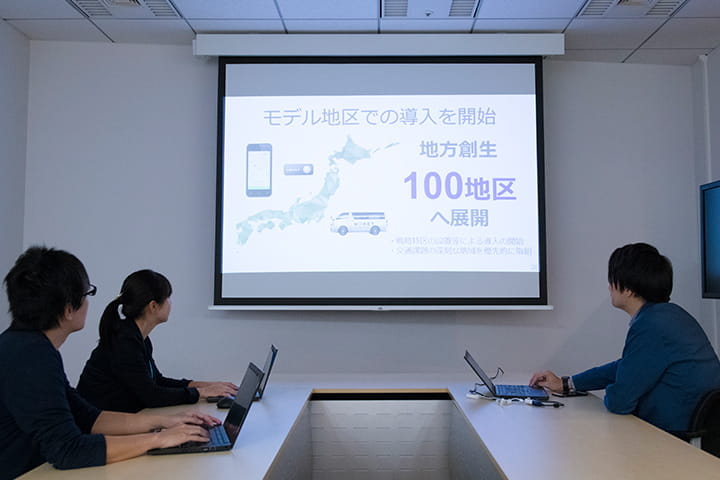 New members continue to flow into the Advanced Technology Division. The project was moving forward at such a speed that the discussion started by a handful of persons in February 2018 led to the announcement in October that the JV would be established by the end of fiscal 2018. SoftBank embraces change, boasting a corporate culture that highly values and wholeheartedly fosters the mind-set to take on new challenges. There are no limitations. If you want to take on a particular challenge, all you need to do is come forward and seize the chance.

※All information above is as of March 2019.